GRX-917 could potentially benefit other neuropsychiatric and neurologic disorders, beyond anxiety. 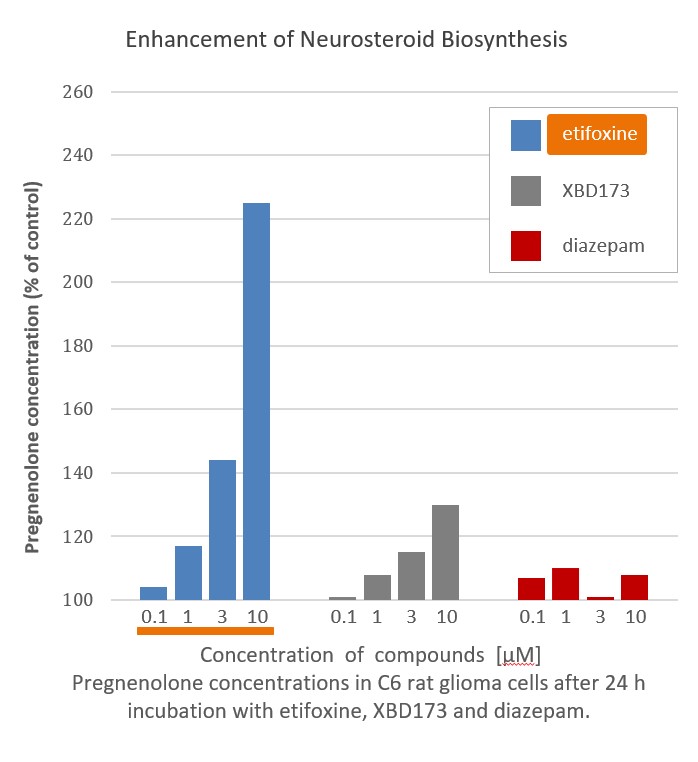 The neuropsychiatric and neurologic disorders listed to the right all show reduced and dysregulated neurosteroid levels.

Etifoxine has demonstrated preclinical efficacy in each of these 11 disorders, by enhancing neurosteroid tone. All research data is provided in published studies, which are available under the Publications tab.

A number of studies detail etifoxine’s efficacy in models of neuropathic and inflammatory pain. The compound was not only able to reduce the response to pain symptoms, but directly affect the reduction of inflammatory factors, like TNF-α and IL-6. For supporting studies click here.

All of these pre-clinical studies were conducted using dose levels of etifoxine consistent with anxiolytic activity.

Etifoxine has demonstrated efficacy in several models of multiple sclerosis, brain injury and stroke, direct nerve injuries, acellular nerve grafts, retinal degeneration and epilepsy. Etifoxine has been shown to upregulate nerve growth factors, such as GDNF, BDNF and NGF. Notably, etifoxine has also been revealed as a very effective microglia modulator. Microglia modulators are the focus of intense investigation in neurodegenerative diseases, like Alzheimer’s. For supporting studies click here.

11% of Etifoxine prescriptions in France were off-label for depressive episodes (based on 2016 data accounted for).

Preclinical and clinical evidences suggests that restoring neurosteroid levels like ALLO could potentially benefit each of the neuropsychiatric and neurologic disorders. Click here to view a table which sets out Preclinical and Clinical Evidences for Dysregulation of Neurosteroidogenesis in Neuropsychiatric and Neurologic Disorders, from Journal of Neuroendocrinology, 2016, 28, 10.1111/jne.12351 .

GRX-917 and etifoxine have NOT been evaluated in disorders 13-20.

Biotech companies are researching ways to externally administer synthetic and natural ALLO.  The Company’s Scientific Advisory Panel pioneered the early development of synthetic neurosteroids in the 1980’s. However, ALLO has very poor oral bioavailability and has to be administered intravenously (i.v.). Its quick metabolism requires unnaturally high doses in order to achieve therapeutic effect. Acute side effects caused by i.v. ALLO include: sedation, headache, dizziness, nausea, and somnolence. Longer term treatment can lead to tolerance, similar to BZs.

Endogenous neurosteroid synthesis by GRX-917 is a superior therapeutic approach, providing precise control of exactly where in the body/brain and how much ALLO is being produced, limiting side effects and longer term tolerance.

“Endogenous neurosteroid synthesis by GRX-917 is a superior therapeutic approach to i.v. injection.”